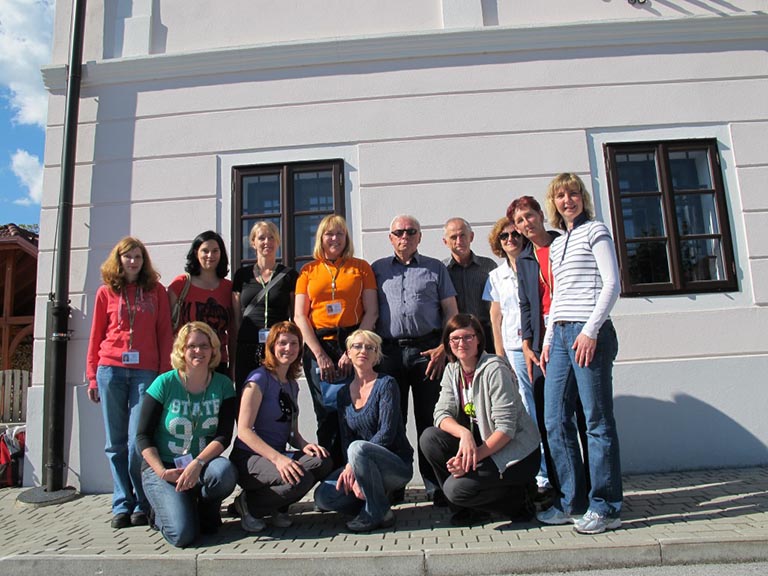 Guided tours are possible every day by prior arrangement. Please contact us at info@tourism-cerklje.si or on +386 04 28 15 822.

You can get to know the history of Cerklje more in detail with a tour of important monuments of cultural heritage.

On the way, in the centre of Cerklje, you can see the baroque church of Mary's Ascension, Plečnik mortuaries, a monument of Davorin Jenko and the outside of a secession villa, which was built by the mayor Ivan Hribar as a summer residence. The path then leads us to a memorial park, dedicated to important men of Cerklje.

Opposite to the park, you will find the Petrovec house, which was a smaller wooden farmers' house until the middle of the 18th century. This was an era, when old wooden and semi - wooden houses were disappearing in Gorenjska region, with the wooden construction only maintained by minor farmers and cottars. The renovated house, locally known as Pr Petrovc, is home to a museum, gallery, library and the Tourist Information Centre Cerklje. In the museum, old lanterns, candle stands, measuring devices, clothes irons... take you into a half - past era, when candles were used instead of electric lights and a time, when our predecessors ironed their clothes with metal clothes irons. In the archaeological part of the museum, the world of the living and the world of the dead meet. Bronze clips, coins, metal nails, which have fallen off the soles of Roman shoes, oil lamps which lit the way for the dead into the dark underground - all of these were found in the countryside ancient Roman cemetery and the old village Roman road, constructed approximately 2000 years ago.

At the foot of Štefanja gora, upon entering the Graben valley, we have a view of Adergas where, in the middle of the village, a former monastery and now parish church of Mary's Annunciation reigns with its rich cultural and historical heritage. The church renovation has started in the year 1732 and ended in 1771, giving it typical elements of Italian architecture. This late baroque building is adorned with seven altar paintings of the well known Austrian baroque painter Johann Martin Schmidt from Krems. The most famous work of art in the church is the Roman pilgrimage statue of Mary with Jesus. It is the oldest preserved statue of Mary in Slovenia from around 1220. From the middle ages on, they change the clothes of the statue for various church holidays. It is assumed, that the statue was gifted by Patriarch Berthold II upon the founding of the monastery. Four pictures from Mary's life hang on the choir, work of the most prolific baroque painter in Slovenia, Jean Valentine Metzinger, born in 1699 in St. Avold in Lorraine. Catacombs below the church were intended for the burial of nuns which lived in the monastery. On the hill above the village, we can still see ruins of the castle Kamen, which was destroyed during a Turkish raid in the year 1471.

In the bee keepers museum you will be introduced to the tradition of making honey in the past and today. The museum has a neatly arranged shop, where you may purchase various types of home made honey, propolis, pollen, mead and beeswax products.

At the herbal bio farm you will be offered traditionally cultivated ecological herbs in the form of teas, ointments and tinctures, which will help you cure the common cold and many other troubles.