Whilst in the old municipaltiy of Kranj, Cerklje was developed a local supply centre and equipped with the required supply functions. 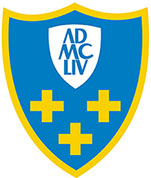 The coat-of-arms of the municipality is a shield with a round top joint, with the first historically mentioned year of existence enscribed upon it.

The lower part of the coat-of-arms shows three identical crosses. They represent the three churches which stood in the Middle Age in the centre of the village, and after which the town got its name.

The flag of the Municipality Cerklje na Gorenjskem

The flag has three equal longitudinal fields in the colour order blue - yellow - blue. The colours originate from the coat of arms and thus have an equal value.

The proximity of the Brnik airport, only 4 km from the centre of Cerklje, enables a great air connection.

The municipality of Cerklje na Gorenjskem has celebrated its feast day since the 23rd of September 1999.

On that day, 80 years had passed since the death of Ignacij Borštnik, who was born in 1858 in Cerklje. Every year in September many cultural and sporting events take place to re-establish the bond with the areas history and tradition.

The opening of the renewed memorial park at Hribar's house in the municipality was on this day in 1999. The first statue in the park, of Ignacij Borštnik, stands next to here. Today there are 6 statues to historically important people in the park.

At the feast day every year the region grants recognition to its most deserving citizens.

In 2004, the municipality celebrated the 850th anniversary of its first written mention, where the church of Maria still stands today (1154).

The municipality of Cerklje na Gorenjskem is situated in the north-east part of the basin of Ljubljana, from the basin up to the high mountain area of the Kamniško-Savinjske Alps.

The relief of the whole area is quite agitated, and can be seperated into three natural-geographic units:
- the mountainous area of the Kamniško-Savinjske Alps
- the hilly area
- the plains of the Kranj-field in the south

The municipality is surrounded in the north by the Kamniško-Savinjske Alps (Trias carbonate stoneware – mostly limestone), which goes over from the limestone Krvavec in the southern direction to a soft “ogliocean hills”, where stratums of marl and sandstone and tuff are exchanging.

The other twenty villages are placed in the plains of the Kranjsko-Sorško field and conclude at the Ljubljana plain or depression on rich ground. There is little known about ore riches for economic use, but deposits of clay and loam have been found.